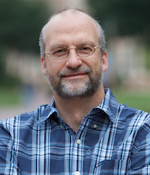 In The Paradox of Generosity: Giving We Receive, Grasping We Lose, they provide empirical evidence that acts of generosity are strongly correlated with well-being. According to their research, people who are generous with their money, time, and associations are happier, healthier, and more resilient than their less generous counterparts.

The book, which has been featured in The New York Times, Forbes magazine, and on PBS NewsHour, makes use of information gathered in Notre Dame’s five-year Science of Generosity Initiative. In an unprecedented nationwide survey, Smith found that only 2.7 percent of Americans give a 10th or more of their income to charity, and 86.2 percent give away less than 2 percent of their income. Nearly half of those surveyed give nothing at all.

Smith and Davidson argue that this reluctance to give not only deprives those in need, but also diminishes the happiness of those who could, but don’t, help them.

“By grasping onto what we currently have,” Smith and Davidson write, “we lose out on better goods that we might have gained. In holding onto what we possess, we diminish its long-term value to us. By always protecting ourselves against future uncertainties and misfortunes, we are affected in ways that make us more anxious about uncertainties and vulnerable to future misfortunes.

“In short, by failing to care for others, we do not properly take care of ourselves.”

It is not merely giving away resources that reaps benefits, Davidson emphasized, but how the giver sees the act of generosity and the world that matters.

“That was my biggest takeaway from the data,” she said. “It’s about attitude. It’s about whether you believe you have enough in the world to sustain you—whether you believe we live in a world of abundance, in addition to the socioeconomic position we each hold in society and inseparable from the extent to which we are, or are not, privileged.”

“The ability to collaborate on projects has been a wonderful part of my graduate school experience,” she said. “Notre Dame’s approach focuses on mentorship, teaching, and developing skills within a community of scholars.”Davidson, who will receive her Ph.D. this fall, said the opportunity to work and publish with Notre Dame faculty members has been a gratifying experience.

That supportive, generous environment also makes the University an ideal home for this type of research, she said.

“I think Notre Dame is the perfect place to study generosity, precisely because that desire to give back—and to think critically and carefully about how we can give back—is such a large part of the culture here.”

Originally published by Arts and Letters at sociology.nd.edu on May 13, 2015.