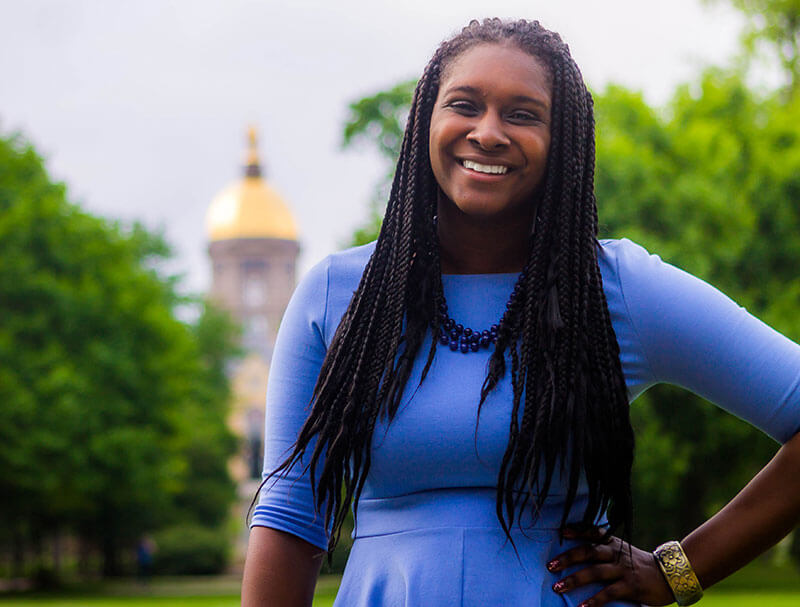 Notre Dame alumna Ray’Von Jones ’16 wants to make a difference in the world of education.

And her sociology and Spanish majors are going to help her get there.

“Education doesn’t only happen inside schools,” Jones said. “It happens in communities and in neighborhoods. So it’s important for me to have a larger understanding of what’s going on in our country in terms of racial climate, what different communities look like, and how they interact.

“In sociology, you get to learn about the different ways education is shaped and experienced by different populations in our society.”

Jones, who will begin a master’s of education program at Stanford University this year, said her Spanish major will also help her connect with the growing number of Latino students and parents in U.S. schools.

“That was a big part of my motivation to learn the language,” she said. “There’s something powerful in having the kind of cultural exchange that comes from knowing someone’s language and being able to communicate with them.”

Jones, an education, schooling, and society minor, received a Gilman Scholarship to study in Toledo, Spain, as a junior and won but ultimately declined an English teaching assistantship to Mexico from the Fulbright U.S. Scholar Program. She eventually hopes to teach at a public school in an urban setting.

“Education has always been really important to me, because it’s opened a lot of doors in my life,” Jones said. “I went to schools where I saw a lot of the inequalities in education play out—in my experience and the experiences of others. I am hoping that with my degree, I can enact change in education.”

At Notre Dame, her passion has translated to a commitment to service and research. Through her work in Shades of Ebony, a club for African American women at Notre Dame, Jones mentored high school girls in the same South Bend community in which she grew up.

“What I learned in my time mentoring these young women is that they have a lot to say,” Jones said. “It’s not that they don’t have a voice, but that sometimes people aren’t listening.”

Jones researched the challenges they face and brought them to light in her senior thesis project, “Hearing and Caring for Black Girls: Experiences and Outlooks of African-American Girls at South Bend’s Washington High School.”

The project is a culmination of the research she has done as an undergraduate, including two projects she presented at professional conferences with her faculty adviser, Maria McKenna, senior associate director of the ESS minor. With funding from the Center for Undergraduate Scholarly Engagement and the Undergraduate Research Opportunity Program, Jones presented her work on social justice and youth empowerment in education in Maynooth, Ireland, and Grand Rapids, Mich.

Reflecting on her time in Arts and Letters, Jones appreciates the close relationship she developed with professors—who saw her potential and introduced her to research opportunities she wouldn’t have been aware of otherwise.

And she feels ready for whatever her future may hold after graduate school.

“Leaving Notre Dame is bittersweet because I’ve had so many amazing experiences here. But, I feel prepared to move forward,” she said. “I’ve learned so many skills that I can apply to any field and to my life.

“I feel like I’m ready to make a difference in the world—even in small ways—and I’m excited to do that.”