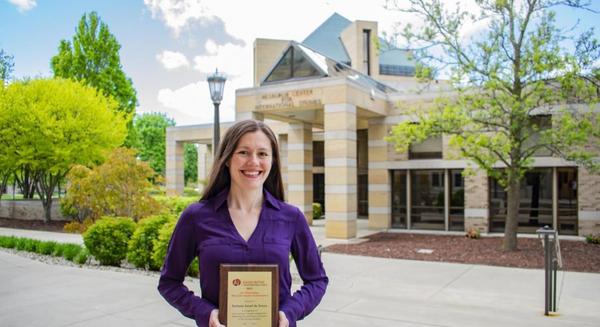 The award, which carries a $500 prize, recognizes a doctoral student affiliate for outstanding contributions to the intellectual life of the Kellogg Institute for International Studies.

Israel de Souza, a sociologist and a former Kellogg PhD Fellow, spent 24 months conducting ethnographic fieldwork in two neighboring Brazilian favelas that were part of a proximity policing program called “pacification.” The program was intended to undermine the dominance of drug dealers and reduce police violence in the lead-up to the 2014 World Cup and the 2016 Summer Olympics.

Her dissertation, “Expiration Date: Mega-Events and Police Reform in Rio de Janeiro’s Favelas,”focused on changing social relations that resulted from the state intervention. Her research was supported by a Kellogg Graduate Research Grant.

Israel de Souza, who has accepted a position as a postdoctoral fellow at the Center for Inter-American Policy and Research at Tulane University, said she was honored to be selected for the award and is grateful to Kellogg.

“Kellogg provided opportunities to engage in interdisciplinary dialogue with others who have deep regional knowledge and are passionate about the issues they study,” she said. “These conversations have been central to my formation as a scholar. But most of all, Kellogg has been a source of community and of friends that I know I will remain connected to even after graduating.”

That involvement included presenting and participating in conferences and workshops, such as a 2018 workshop on women studying violence, and helping to organize scholar visits. Israel de Souza also contributed to the work of faculty fellows Ann Mische and Erin McDonnell, as well as to an article published by Spillman.

Israel de Souza received a number of external fellowships and grants to support her dissertation research, which explored factors that contributed to the failure of the pacification program, including: the connections of drug gangs between and beyond favelas, the shifting nature of policy corruption, and the futility of a permanent strategy based around mega-events.

In the favelas, she observed shifting relations among residents, police, and drug dealers, and relative peace giving way to territorial disputes and frequent shootings.

“Temporary public security interventions can have disastrous consequences for marginalized communities, even when carried out under the guise of promoting human rights and reducing police violence,” she said in 2017.

That year, she was one of 10 students in the United States awarded a $20,000 Harry Frank Guggenheim Foundation Dissertation Fellowship, which supports PhD candidates – particularly those studying topics related to violence and aggression – in their final year of dissertation completion.